This manually-operated vertical screw-down wool press weighing over one tonne is of unknown origin – there is evidence of a name-plate having once been on one of the pillars. Research indicates that this press was one of the first of its kind imported into Australia.  It is highly likely that the press was made in England in the c1840s, disassembled, shipped to South Australia by sailing ship in the late 1850s, and transported to Black Rock Station, nine miles from present-day Orroroo by bullock wagon where it was reassembled for use in the wool shed.
The operation of the press was fairly simple yet very laborious. An empty jute wool pack was placed inside the bottom iron ‘box’ or bin of the press, filled and refilled with wool several times and compressed by a square flat cast iron plate (the platen or ‘monkey’) until deemed ‘full’ by the wool presser.

Up to four men or boys then turned the steel screw attached to the monkey from a wooden platform high in the roof space of the shed by pushing solid iron bars around as they walked in a clockwise direction. The monkey was then raised by turning the screw anticlockwise – the wool held in place by long skewers, the pack fastened, and a jute ‘cap,’ secured to the underside of the monkey by iron spikes, stitched to the top of the pack using a large, curved needle and twine.
The hinged iron doors on the front and back of the bottom bin of the press were opened, and the bale was hauled out – a relatively heavy bale of wool, removed and branded with the name of the property, wool description and the bale number branded onto its top and side.

Looking back, the press would have had a few drawbacks. The wool shed needed to be much higher than the press itself. The process was labour intensive and slow as the monkey only moved about an inch for every full turn of the screw.  Sometimes it required the force of four men or a horse to empty the full bale from the lower box as it was jammed so tightly.

The Wool Press is believed to have been last used at Black Rock Station in the 1920s – an extremely robust and heavy piece of equipment, which along with other early presses inspired numerous innovators to improve presses of the day, and design and make an array of different types of presses up to this day, some successful, some not so.

The Black Rock Wool Press has historical significance due to its rarity and association with some of the earliest European pastoralists in the Orroroo district, and the role it played in pastoral operations. The press is an example of evolving 19th Century wool technology and the fact that it remains serviceable and capable of demonstrating the screw-down mechanism is testament to its makers.

The press was donated by Tony and Barbara Nutt and rescued from its deteriorating 160-year home in the former Black Rock wool shed by a group of locals in 2018. After many hours of blood, sweat and toil, the press was repaired and restored back to its former glory by Dean Keatley, assisted by his brother Brian.

Following support from the District Council of Orroroo Carrieton and successful funding from the Australian Government, the Foundation for Rural & Regional Renewal and the Council the project evolved and the  custom built main street ‘Woolshed’ was achieved to house the Wool Press. The impressive display forms the ‘centerpiece’ of a much larger Heritage Trail which will tell many of the stories, promote the culture and vibrancy, and celebrate the characters associated with the district’s history. 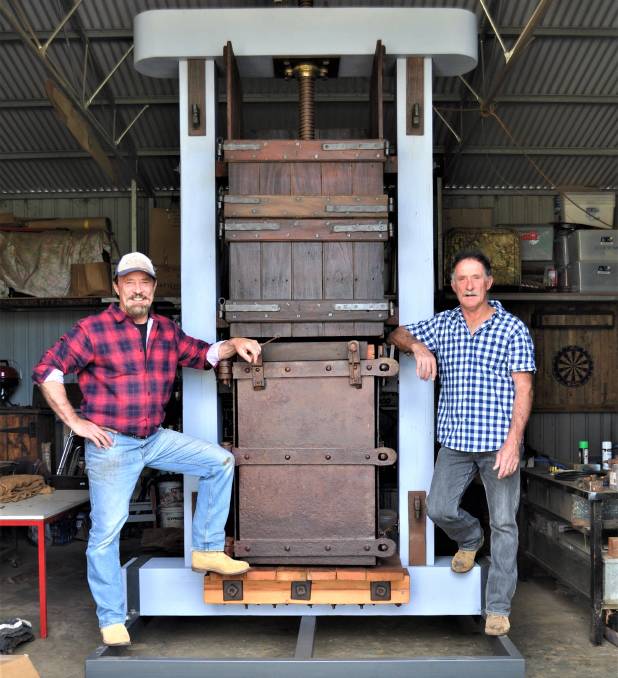